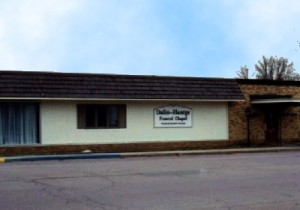 Caring For The Special Needs Of The Winthrop Community When the first settlers made their homes in Winthrop, Minnesota, they were faced with providing for the immediate needs that would arise. The essentials of shelter, water and food had to be met. A church and school had to be provided as soon as possible. There also needed to be a cemetery and provisions had to be made for dealing with death.

Construction began on the Hinterburg and Westby Funeral Home in 1950. G.A. Hinterburg and Paul Westby built the new funeral home and furniture store at 209 West Second Street, where the current funeral chapel is located today. The store opened its doors for business in early 1951. The new facility offered furniture sales, undertaking facilities and also provided headquarters for the ambulance service of Winthrop.

On August 16, 1959, a bolt of lightning started a fire in the building, causing over $20,000 worth of damages. During the renovation of the facility, the funeral chapel in Gibbon was utilized in serving the needs of Winthrop families.

Burton Dalin, a native of Chisago City, Minnesota, who previously worked at the Klein Furniture and Funeral Home in St. Peter, Minnesota, took over the business in May of 1960. Burt continued the ambulance service and added carpet, floor coverings, wall coverings and paint to his furniture and funeral services. Dedicated employees Chester Lager, Frank Schreiner, Rollie Olson, Fred Grochow, Art Martin and Violet Walz contributed to the success of the business. Dalin dropped his furniture line in 1971, and devoted two-thirds of his business remodeling that same year to an expanded funeral chapel.