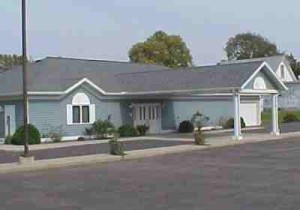 Caring For The Special Needs of the Gaylord, New Auburn and Bernadotte Communities

In 1899, Gustav Kimmet and his brother-in-law, John Guetschoff of Gaylord, opened their undertaker parlor at the present site of the Prairie House parking lot located on 5th Street and Sibley Avenue. From 1916 to 2000, there were four different locations  in Gaylord, for the funeral business; the last being the new building at 74 Main Avenue near the  downtown area.

The corner building was the location of the funeral chapel on 4th Street  and the smaller building to the left was the furniture store.

In 1922, due to the death of Gustav Kimmet, Clarence Quist acquired his interest; and renamed the firm Guetschoff & Quist. In 1929, William H. Matthes bought Quist’s share. Quist relocated into the large Busch building, and named the business C. O. Quist Furniture. There he also provided funeral service and ambulance services. In 1937, he bought the Mueller Bros. building at 219 Fourth Street and remodeled it into a furniture store and funeral parlor. 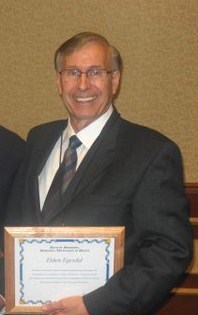 On May 20, 2013, Al Egesdal received a plaque in honor of his 50 years in Funeral Service at the Minnesota Funeral Directors Association Convention in Red Wing, Minnesota.

Elden (Al) Egesdal, a native of Elmore and a graduate of the University of Minnesota Department of Mortuary Science in 1962, became an employee in 1972. From 1959 to 1962, Al worked for Washburn-McReavy Funeral Chapel in Minneapolis and lived in an apartment above the chapel. He took night calls and worked part time while he was a student at the University. Al served his apprenticeship in Minneapolis, and Anchorage, Alaska, for 2 years. Al purchased the Quist & Johnson business in 1976.

In 2004, upon the illness of his wife, Laura Jean, Al sold the Egesdal funeral home in Gaylord to Robert and Richard Hantge, who are the present owners.

For over 50 years, Al has served his profession in a caring and compassionate way and continues to assist the Hantge’s in serving the needs of the Gaylord, New Auburn and Bernadotte area.