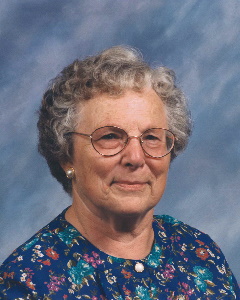 Funeral Service will be held Monday, January 10, 2022, at 2:00 P.M. at Peace Lutheran Church in Cosmos with interment in the church cemetery.

Arrangements are with the Hughes-Hantge Funeral Chapel in Hector.

Ardell Minnie Johnson was born on September 21, 1924, in Cosmos, Minnesota. She was the daughter of Herbert and Anna (Kaliebe) Schiro. Ardell was baptized as an infant on October 4, 1924, and later confirmed in her faith as a youth on April 25, 1937, both at Peace Lutheran Church in Cosmos. She received her education in Cosmos, and was a graduate of the Litchfield High School Class of 1942. In her youth, Ardell helped her father in his harness and shoe repair shop in Cosmos, that he opened in 1922.

On October 15, 1944, Ardell was united in marriage to Gordon Johnson at Peace Lutheran Church in Cosmos, by Rev. E.J. Kaiser. They made their home in rural Cosmos, where they were engaged in farming. In 1965, they became foster parents to Robert “Chris” and James “Sam” Schroder. Ardell felt it was a privilege to raise the boys, and she did an outstanding job making a new home for them after the loss of their parents.
Ardell and Gordon shared 36 years of marriage, before the passing of Gordon in 1980.

Guided by her faith, Ardell was a kind and caring person who was a very devoted member of Peace Lutheran Church her entire life. She belonged to Luther League in her youth and was a Sunday School and Vacation Bible School teacher. Ardell held many positions with Peace Lutheran Church Women, and will be remembered for her love of quilting for her church.

Ardell was a member of the Cosmos American Legion Auxiliary, beginning at the age of 15 when she became a junior member. She volunteered countless hours at the Cosmos Legion Club preparing meals for events in the community. Ardell worked for many years in Cosmos, including Leonard Svien’s IGA grocery store and Sathre’s Market. She enjoyed spending time in her garden, playing cards, and bowling with her friends.

Ardell passed away on Saturday, January 1, 2022, at Woodstone Senior Living in Hutchinson, Minnesota, at the age of 97 years. She will be greatly missed and never forgotten.

Ardell is survived by her
Foster Son, James Schroder of Cosmos, MN;
Grandchildren, Adam, Jeremy, Renee and Glen Schroder;
Great-grandchildren, Maxwell and Madeleine Schroder;
Special niece and nephews.
Many other relatives and friends.