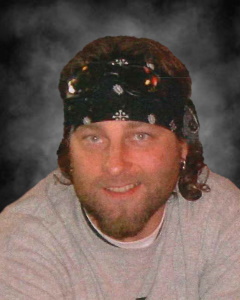 Bryan J. Marconcini, age 44, of Mankato, Minnesota, formerly of Hutchinson, Minnesota, passed away on Friday, October 8, 2021, at his home in Mankato.

Gathering of Family and Friends will be on Tuesday, October 26, 2021 from 5:00 to 8:00 P.M. at Dobratz-Hantge Funeral Chapel in Hutchinson, Minnesota.

Bryan James Marconcini was born on June 30, 1977, in Hutchinson, Minnesota. He was the son of Delroy and Patty (McLain) Freitag. Bryan was baptized as an infant and later confirmed in his faith as a youth at Peace Lutheran Church in Hutchinson. At the age of 4, he moved to California with his mom and step-dad. In 1986, Bryan and his family moved back to Minnesota and resided on Lake Allie. He received his education in Buffalo Lake/Hector, Minnesota, and was a graduate with the Buffalo Lake/Hector High School class of 1996.

Bryan enjoyed riding his Harley Davidson. He especially looked forward to the large family gatherings, spending time with his family and friends, and playing cards with grandpa and uncles. Bryan had a very soft heart for people. He was loved by many and touched many peoples heart, he will be tremendously missed.