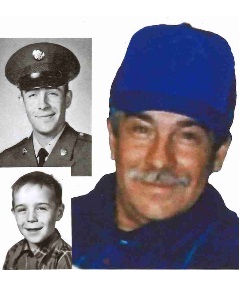 Gathering of Family and Friends will be Saturday, June 26, 2021, one hour prior to the service at the church.

Charles “Charlie” Edward Case was born on March 28, 1947, in Sleepy Eye, Minnesota. He was the son of Cecil and Stella (Kiecker) Case. Charlie was baptized and confirmed at the United Methodist Church in Fairfax. Charlie was a 1965 graduate of Fairfax High School.

Charlie served in the United States Army from 1966-1970. During his time in the service, he was stationed at Forts Leonard Wood, Gordon, Benning, and Campbell, ending there by getting his paratrooper wings in the 101st Airborne Division. His next station was a Nike Missile base in Milwaukee, Wisconsin. In 1968, he was sent to Vietnam and stayed there for two tours, coming home in October of 1970. He specialized in aircraft recovery, transportation and supply. For a short time, while stationed in Saigon, he also helped with triage of wounded and injured service men and women. Charlie received several Army Commendation Medals and two Bronze Stars, leaving with the rank of Sergeant E5.

After coming home, he settled into farming with his Uncles Ervin and Armin in Wellington Township. Charlie enjoyed fishing, small game hunting, reading, picnics, road trips and who could forget how he could tell a grand story. Many thanks from his family, as he was a superb caregiver to our mother and uncle. He cherished his time spent with family and friends. When asked by a chaplain, what he was most thankful for, he replied, “That God has given me a long and wonderful life and a family I love.”

Charlie, beloved son, brother and uncle, passed away on February 21, 2021, at his home in rural Fairfax, Minnesota.

Charlie was preceded in death by his Parents, Cecil and Stella Case; Uncles, Ervin and Armin Kiecker, Bob Case, Gene Frank and other Uncles, Aunts and cousins.