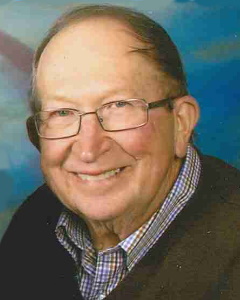 Funeral Service will be held Saturday, June 25, 2022, 11:00 A.M. at First Evangelical Lutheran Church in Glencoe, Minnesota with interment following at the church cemetery.

Dale Otto Duenow was born on September 25, 1936, in Glencoe, Minnesota. He was the son of Otto and Ruth (Zaske) Duenow. Dale was baptized on October 18, 1936, by Rev. Alfred Streufert and later confirmed in his faith on April 2, 1950, by Rev. Alfred Streufert, both at First Evangelical Lutheran Church in Glencoe, Minnesota, where Dale was a lifelong member. He attended Glencoe High School and graduated with the class of 1954.

On June 9, 1974, Dale was united in marriage to Linda Gerde by Rev. Carl Listug at Chippewa Falls Lutheran Church in Terrace, Minnesota. Dale and Linda made their home in Glencoe, Minnesota.   They shared 48 years of marriage. Dale was very proud of his son, Joel and daughter-in-law, Grace and his two grandchildren. He loved being Grandpa to Augie and Inga, keeping in contact through FaceTime between visits.

Dale farmed with his father following high school. He served in the Army National Guard from 1959 to 1965. In 1973, he began working at Glencoe Manufacturing where he was employed until the plant closed, after which he worked at Hutchinson Technology Incorporated until he retired in 2003.

Dale enjoyed gardening (his little farm). He raised a variety of vegetables with enough to share. He grew many beautiful flowers including hundreds of daffodils and zinnias, plus many rose bushes and hardy hibiscus bushes. People would make a point of walking through the alley to check out his accomplishments.

Dale enjoyed following Glencoe-Silver Lake Panther sports, Minnesota Gopher sports, and the Minnesota professional teams. Most of his wardrobe consisted of t-shirts, sweatshirts, and caps of his favorite teams, which always provided a good conversation starter when traveling.

Reading was another of Dale’s hobbies. He read the Star Tribune every day, always starting with the Sports section. He also enjoyed sports books and history books.

We are very appreciative for all the love and care extended by the Hospice team. Dale thought you were all very special!