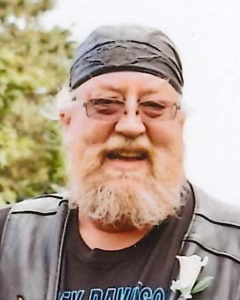 Gathering of Family and Friends will be held Saturday, January 22, 2022, from 11:00 AM to 4:00 PM at Hunters Ridge Church in Hutchinson, Minnesota.

The family invites everyone to dress in their Harley Davidson or other motorcycle gear.

Edward entered active military service in the United States Army right out of high school and was stationed in Germany. He received an Honorable Discharge on June 6, 1982.

On May 5, 1990, Edward was united in marriage to Teri Ward at First Evangelical Lutheran Church in Hector, Minnesota. This marriage was blessed with two children, Amy and Tylor. Edward and Teri resided in Hector. They shared 20 years of marriage before the passing of Teri on December 31, 2010.

Edward was employed in the HVAC Department at Hutchinson Technology Incorporated in Hutchinson, Minnesota for 20 years. He then went on to work at 3M in Hutchinson. Edward was a member of the Renville Rangers Shooting Club.

Edward enjoyed hunting, fishing, going to the casino, and riding his motorcycle. He especially enjoyed spending time with his family, grandchildren and friends.