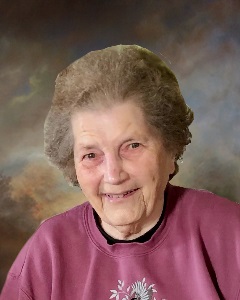 Funeral Service will be Tuesday, November 23, 2021, 11:00 A.M. at First Evangelical Lutheran Church in Winthrop with interment in the Winthrop Cemetery.

Elaine Mathilda Forsberg was born on October 15, 1926, in Winthrop, Minnesota. She was the daughter of Gustaf and Edith (Johnson) Lindstrand. Elaine was baptized an infant and was later confirmed in her faith as a youth. She received her education in Winthrop and was a graduate of the Winthrop High School Class of 1944. She furthered her education at St. Paul Nursing School in St. Paul, Minnesota.

On September 22, 1951, Elaine was united in marriage to Glendan Forsberg at First Lutheran Church in Winthrop. After their marriage, the couple resided and farmed the Forsberg family farm in Cornish Township.  She was loving mother and homemaker. Elaine and Glendan were blessed with three children and shared 55 years of marriage when Glendan passed away on June 7, 2007.

Elaine was a member of First Evangelical Lutheran Church in Winthrop.

Elaine enjoyed crocheting, cooking, entertaining and helping on the farm. She was a kind, loving, non-judgmental, positive and thoughtful person. She cherished the time she spent with her family, especially her children, grandchildren and great grandchildren.