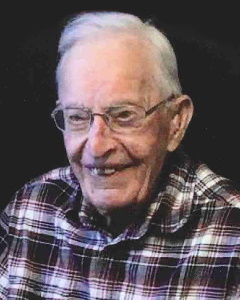 Funeral Service will be held Monday, May 16, 2022,11:00 A.M. at St. Paul’s Evangelical Lutheran Church in Lester Prairie, Minnesota, with interment following at the church cemetery.

Military Honors will be performed by the Lester Prairie American Legion Post #463.

Emmert Fred Schroeder was born on October 1, 1921, in Silver Lake, Minnesota.  He was the son of Henry and Helena (Quast) Schroeder. Emmert grew up on a farm outside of Silver Lake.  Emmert was baptized in the Christian faith as an infant and was later confirmed in his faith as a youth.

Emmert was inducted into the United States Army on September 9, 1942. On September 21, 1942, he entered active duty from Fort Snelling in Minneapolis, Minnesota, as an Army Private First Class. Emmert’s occupational specialty was as an ammunition handler. His troop was named the “Fighting Sixtieth Chemical Company.”  Emmert and his troop traveled to England, France, Belgium, and Germany, always traveling by ship. Different divisions fought in the European Theater, Emmert’s troop specifically fought in the battle in Normandy, Northern France, Ardennes, Rhineland, and Central Europe. He was awarded the Good Conduct Medal and the European-African Middle Eastern Theater Service Medal. Emmert received an honorable discharge on November 21, 1945. Emmert made sure to keep in touch with his fellow soldiers by attending the WWII reunions.

Emmert met the love of his life when he started receiving and responding to letters sent to him from a lady while he was serving in the Army during WWII. On May 16, 1947, Emmert was united in marriage to that lady, Dorathy Karels at St. Paul’s Evangelical Lutheran Church in Lester Prairie, Minnesota. Emmert and Dorathy were married for over 66 years, until Dorathy’s passing on July 25, 2013. Emmert and Dorathy lived with Dorathy’s parents for 4 years and then rented and purchased their own farm north of New Germany where they made their home. Their marriage was blessed with three daughters, Joan, LaVonne, and Sherry.

Emmert took pride in his family and his farm. Emmert was a dairy farmer, crop farmer, and raised beef cattle. He cherished all the time he spent caring for his homestead. The farm was something Emmert built upon, he actually started working there as a farmhand, and years later he purchased it. Emmert was one of the most successful farmers in Carver County. Everything had its place and was always ready to go. He truly embodied being a part of “America’s Greatest Generation.” He was devoted to his family, church, and farm business. Emmert was a faithful member of St. Paul’s Evangelical Lutheran Church in Lester Prairie. He was strong not only in muscle but also in heart. He always had time for his grandchildren and great-grandchildren, as long as it was before wrestling started on tv for the evening.