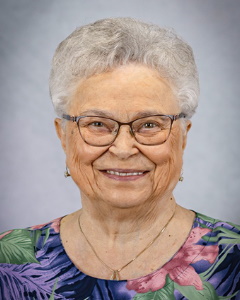 Memorial Service will be held on Wednesday, November 24, 2021, at 11:00 AM at Dobratz-Hantge Chapel in Hutchinson.

Gerta Emma Meier was born on May 6, 1939, in Dürrmaul-Marienbad, Germany. She was the daughter of Josef and Maria (Stich) Plail. Gerta was baptized as an infant and was later confirmed in her faith as a youth. She was a graduate of St. Ursuline Schule in Fritzlar, Germany. Gerta furthered her education for three years at Business School.

On September 6, 1963, Gerta was united in marriage to Douglas Meier in Frankfurt Höchst, Germany. After their marriage and 20 years of military service, the couple relocated to Hutchinson. This union was blessed with two children, Steve and Susan. Gerta was employed as a bank teller and held various other jobs. Gerta and Douglas shared 58 years of marriage.

Gerta was a member of St. Anastasia Catholic Church in Hutchinson, and Women’s Club.

Gerta enjoyed traveling, gardening, bird watching, golfing, bowling, eating out, playing cards, and gambling. She cherished the time she spent with her family, especially her children, grandchildren, and great-grandchildren.