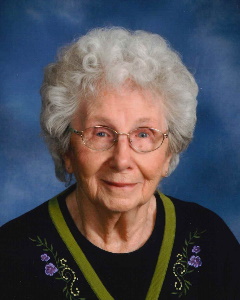 Grace Kosek, age 93, of Hutchinson, Minnesota, passed away on Monday, January 16, 2023, at her home in Hutchinson.

Mass of Christian Burial will be held on Monday, January 30, 2023, at 11:00 A.M. at St. Anastasia Catholic Church in Hutchinson with internment at a later date.

Visitation will be held Sunday, January 29, 2023, from 3:00-6:00 P.M. at Dobratz-Hantge Funeral Chapel in Hutchinson and will continue one hour prior to the service at the church.

Grace Hilma Kosek was born on February 22, 1929, in Lester Prairie, Minnesota. She was the daughter of Ferdinand and Martha (Kern) Woller. Grace was baptized as an infant on May 24, 1929 at Methodist Church in Stewart, Minnesota, and was later confirmed in her faith as a youth in 1945 at St. Boniface Catholic Church in Stewart. She received her education through the eighth grade in Glencoe, Minnesota.

On November 14, 1945, Grace was united in marriage to Dennis Kosek at St. Boniface Catholic Church in Stewart. This marriage was blessed with eight children. Grace and Dennis resided in Stewart until 1953, when they moved to rural Brownton, Minnesota and began farming. They shared 67 years of marriage before the passing of Dennis on April 27, 2013. Grace later moved to Hutchinson, Minnesota.

Grace was primarily a homemaker and was later employed at Green Giant in Glencoe for 25 years, Petersons Mink Farm in Brownton, Browns Floral and Green House for 19 years, and Avon for several years. She retired in 1993. Grace was a member of St. Anastasia Catholic Church in Hutchinson, Minnesota.

Grace passed away peacefully on Monday, January 16, 2023, at her daughter’s home in Hutchinson, at the age of 93 years.