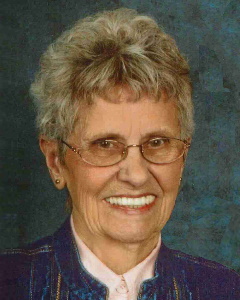 Private Family Graveside Service will be held at the Glencoe City Cemetery in Glencoe, Minnesota.

Jeanine (Lungstrom) Wedin was born in New London, Minnesota, on November 4, 1928, to William and Nina (Johnson) Lungstrom.  She was baptized on July 26, 1929, and later confirmed in her faith on May 31, 1942. Jeanine graduated from New London High School.

On September 18, 1948, Jeanine was united in marriage to Paul Harold Wedin in New London, Minnesota. Their marriage was blessed with five children. The Wedin family made their home in Glencoe, Minnesota. Jeanine was a loving homemaker and mother.

In September of 1958, Jeanine and Paul purchased Kadlec Drug store in Glencoe. Jeanine assisted Paul in the operations of Wedin Drug while raising their children. In 1995, the pharmacy practice was sold and the business was converted into Pam’s Hallmark Gold Crown, where she continued to work part-time until the business was closed.

Jeanine was a member of Christ Lutheran Church in Glencoe. She enjoyed sewing, baking, and cooking whenever she had the chance. Jeanine loved rooting for the Golden Gopher basketball and football teams, as well as the Minnesota Vikings. She greatly cherished the time spent with her family and friends.