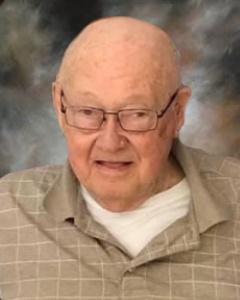 Mass of Christian Burial will be held on Saturday, September 18, 2021, at 2:00 P.M. at St. Mary’s Catholic Church in Bird Island, Minnesota with interment in St. John’s Catholic Cemetery in Hector Township, Minnesota.

Gathering of Family and Friends will be held on Friday, September 17, 2021, from 4:00-7:00 P.M. at Hughes-Hantge Funeral Chapel in Hector with Prayer Service at 4:00 P.M. and will continue one hour prior to the service at St. Mary’s Catholic Church.

On July 10, 1948, Jim was united in marriage to Elizabeth Mihm at St. John’s Catholic Church in Hector. This marriage was blessed with ten children, Jeanne, Mary, Roberta, Lawrence, Michael, Katherine, Theresa, Timothy, Dana, and Corey. Jim and Bette resided in Benson for a short time and then spent the rest of their life together in Buffalo Lake. They shared 43 years of marriage until the passing of Bette on March 8, 1992.

Jim began an impressive baking career at 16 in the Benson Bakery, and he loved sharing many stories about his years there. After their marriage, Jim and Bette owned and operated the Buffalo Lake Home Bakery for 47 years, building a small-town institution that is still remembered with great fondness. Jim invented many of his best recipes, including the accidental creation of cinnamon sticks, and his bakery was known for its delicious peanut bars, breads, and rolls. Jim retired from the bakery in 1991, but continued to bake for decades longer.

At age 70, he started a new business. He bought a sawmill and built his own wood kiln to add to his existing woodworking shop in the backyard. Jim enjoyed making cabinets and other items for the church, nursing home, and the Ronald McDonald House. He also spent his time on many woodworking projects for his children and grandkids. Jim had a quick mind and keen sense of humor, and you could count on him for giving inspiring, heartfelt advice to those he loved. He especially enjoyed spending time with his family and friends. Jim was a member of St. John’s Catholic Church in Hector, and more recently, St. Mary’s Catholic Church in Bird Island.

Jim passed away on Tuesday, September 14, 2021, at Carris Health Rice Memorial Hospital in Willmar, Minnesota, at the age of 93 years and one month.