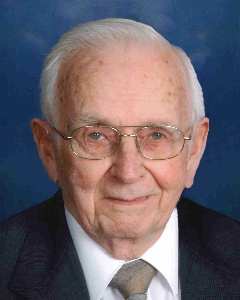 Mass of Christian Burial will be held Friday, August 5, 2022, 11:00 A.M. at Church of St. Pius X in Glencoe, Minnesota with interment following at the Glencoe Catholic Cemetery.

Visitation will be held Thursday, August 4, 2022, from 4:00 – 7:00 P.M., at the Johnson-McBride Funeral Chapel in Glencoe, Minnesota, and will continue one hour prior to the service at the church.

Knights of Columbus Rosary Service will be Thursday, August 4, 2022, 6:15 P.M. at the Johnson-McBride Funeral Chapel with a prayer service following at 6:30 P.M.

James Edward Mayer was born on June 5, 1932, to Raymond L. and Myrtle (Roen) Mayer in Glencoe, Minnesota. James was baptized as an infant on June 19, 1932, and was later confirmed in his faith as a youth on July 9, 1946, both at St. George Catholic Church in Glencoe. He received his education at Glencoe and graduated with the Glencoe High School class of 1950.

James was united in marriage to Lorraine Kemi on November 7, 1959, at St. George Catholic Church in Glencoe. The couple made their home in Glencoe. Their marriage was blessed with four children: Paul, Susan, Daniel and Patricia. James and Lorraine were married for 46 years when Lorraine passed away on June 2, 2006.

After Lorraine’s passing, James reconnected with his high school sweetheart, Marilyn (Patten) Mahle. The couple was united in marriage on April 24, 2010, at the Church of St. Pius X in Glencoe. They made their home in Glencoe. James and Marilyn were married for 12 years when Marilyn passed away on April 25, 2022.

James was first employed at the family pop bottling business, Mayer Bottling Company. This company was originally started by his grandfather, J.B. Mayer, and passed on to his father, Raymond. James and Raymond established a partnership and the company was renamed Mayer & Son Bottling. In addition to the pop bottling business, James drove school bus for the Glencoe school district in the 1950s and later went into the petroleum distribution business. Mayer & Son Bottling was closed for business in 1971. James and his wife, Lorraine “Kem”, owned and operated Mayer Oil Company, which included a gas station along with a bulk fuel business for nearly 30 years. Eventually, James sold Mayer Oil to the Shamlas and continued to work for them. He also went back to driving school bus part-time for the Glencoe-Silver Lake school district. James went into full retirement in 2006.

James led a life of service. He served his country as a Corporal in the United States Army from October 30, 1952, to October 13, 1954. James was an involved member of his church and his community and had a deep faith in God. James was an active member of St. George Catholic Church and Church of St. Pius X, both in Glencoe. He served his church in many ways: parish council, St. Pius X school board, St. Pius X cemetery board, lector and choir member. He was also active with the Knights of Columbus. James was a proud and dedicated member of the Glencoe Volunteer Fire Department for 25 years, 13 of those years he served as the fire chief. He was also a member of the Glencoe VFW Post 5102 and the Glencoe American Legion.

James enjoyed the great outdoors: fishing, duck hunting, deer hunting, and trapping the occasional snapping turtle. He loved spending time at his cabin on Little Lake Hubert. In his downtime, Jim enjoyed baking, smoking various types of meat, reading, and woodworking. For many years, Jim and Kem were active in bowling leagues. Marilyn’s love for anything collectible brought him into many thrift and antique stores. He had a lifelong love for his pet dogs. His love for Christ and his family was unwavering.

James passed away on Sunday, July 31, 2022, at his home in Glencoe from a blessedly short battle with cancer at the age of 90 years old. Blessed be his memory. The family of James would like to give a very special thank you to Ridgeview Hospice and his two caretakers, Melissa and Elizabeth, who helped care for James during this very difficult time.