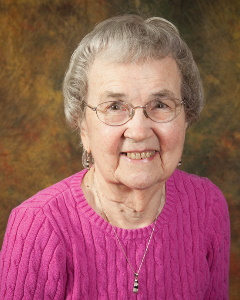 Memorial Service will be held Saturday, December 3, 2022, 11:00 A.M., at Christ Lutheran Church in Glencoe, MN, with interment at a later date at Minnesota State Veterans Cemetery in Little Falls, MN.

Jeannette Gladys (Regnell) Nelson was born May 9, 1921, to John Arthur and Margaret (Carlson) Regnell in Little Falls, Minnesota. She was baptized and confirmed both at Immanuel Evangelical Lutheran Church in Darling, Minnesota. She received her education at Little Falls Public Schools, graduating with the class of 1938. She continued her education at a two-year business college in Minneapolis and received a degree in business.

Jeannette was united in marriage to Harold Andrew Nelson on October 17, 1943, at the Lutheran Church in Little Falls. While Harold was working for Green Giant, they lived in Le Sueur, Cokato, Glencoe, and then back to Le Sueur where they made their home. Their marriage was blessed with three children, Charlotte, Allen, and Pamela. Jeannette and Harold shared 63 years of marriage until Harold passed away on February 6, 2006.

Jeannette was a loving wife, mother, and homemaker. She volunteered at the Le Sueur food shelf and at the nursing home beauty salon in Le Sueur. Jeannette was a faithful member of First Lutheran Church in Le Sueur and for a number of those years, she served with the Ladies Aid. In 2016, Jeannette moved to Glencoe to be near her daughter, Charlotte and joined Christ Lutheran Church in Glencoe.

Jeannette and Harold enjoyed square dancing and playing cards. She greatly treasured the time she spent with her family and friends.

Jeannette passed away Monday, November 21, 2022, at GlenFields Living With Care in Glencoe. Blessed be her memory.