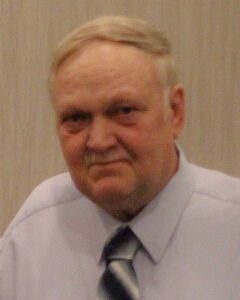 Funeral Service will be held on Monday, November 25, 2019, 11:00 A.M., at the Faith Lutheran Church in Hutchinson with interment in the Oakland Cemetery.

Visitation will be held on Sunday, November 24, 2019, from 4:00 to 7:00 P.M. at the Dobratz-Hantge Funeral Chapel in Hutchinson and will continue one hour prior to the service at the church.

John Chalmer Athey was born on October 5, 1955, in Morris, Minnesota. He was the son of Wilber and Deloris (Anderson) Athey. John was baptized as an infant at his family home on October 6, 1957, and was later confirmed in his faith as a youth at the Methodist Church in Beardsley, Minnesota. He received his education in Beardsley, and was a graduate of the Beardsley High School Class of 1973.

John entered active military service in the United States Navy on November 15, 1976, in Minneapolis, Minnesota. He received an Honorable Discharge on December 28, 1979, at the Naval Reserve Personnel Center in New Orleans, Louisiana, and achieved the rank of Seaman. John entered into the Army National Guard on August 20, 1977, in Ortonville. He received an Honorable Discharge on August 19, 1981 at the Ortonville Armory, and achieved the rank of specialist.

After being in the service, John pursued farming in Ortonville and Graceville until deciding to further his education at the Wadena Technical Institute in 1988.

On November 27, 1982, John was united in marriage to Kathy Thompson at Eidskog Lutheran Church in Ortonville, Minnesota. This marriage was blessed with four children, Valerie, Kimberly, Kristi, and Jerrod. John and Kathy resided in Ortonville, Graceville, and in 1989 they made their home in Hutchinson. They shared 36 years of marriage together.

John had a strong work ethic his whole life. He was a farmer for several years until starting employment at Allied Mechanical as a union plumber in Hutchinson. At the time of John’s passing he was employed at Horwitz in New Hope, Minnesota. John was a member of Faith Lutheran Church in Hutchinson. He was also a member of the American Legion Post 96, Plumbers Union Local 15 and UA.

John was a jokester and always had a good one-liner ready. He enjoyed hunting, fishing, feeding the birds and squirrels, and gardening only his cucumbers and tomatoes. John loved watching Sunday football games which usually turned into a family event and was an avid Minnesota Vikings football fan. He especially cherished spending time with his family, grandchildren and friends.

John passed away on Wednesday, November 20, 2019, at Hutchinson Health, at the age of 64 years. Blessed be his memory.

John is preceded in death by his Father, Wilber Athey and Brother, Joseph Athey.