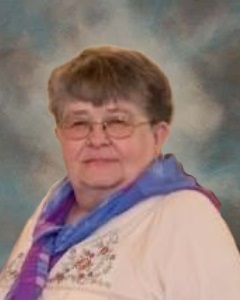 Funeral Service will be held on Monday, September 13, 2021, at 11:00 A.M. at Oak Heights Covenant Church in Hutchinson with interment in the Oakland Cemetery in Hutchinson.

Visitation will be held one hour prior to the service at Oak Heights Covenant Church.

Julie Ann Mielke was born on October 26, 1943, in Hutchinson, Minnesota. She was the daughter of Joseph and Rose (Buehler) Peterson. Julie was always strong in her faith, she was a member of Bethany Baptist Church, later attending Oak Heights Covenant Church. She received her education in Hutchinson, and was a graduate of the Hutchinson High School Class of 1962.

Throughout Julie’s working days, she held a variety of positions including working in restaurant businesses, factory, secretarial, a nursing assistant at Burns Manor Nursing Home and later worked at Walmart for over 10 years until her retirement.

Julie passed away on Sunday, September 5, 2021, at Guardian Angels Care in Elk River, Minnesota, at the age of 77 years.