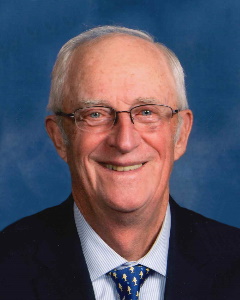 Memorial Service will be held on Thursday, June 23, 2022, at 11:00 A.M. at First Lutheran Church in Litchfield, with interment in the Ripley Cemetery in Litchfield.

Karl Daniel Lundin was born on August 14, 1941, in Litchfield, Minnesota. He was the son of Albin and Myrtle (Ahlstedt) Lundin. Karl was baptized as an infant and later confirmed in his faith as a youth at First Lutheran Church in Litchfield. He received his education in Litchfield, and was a graduate with the Litchfield High School class of 1959.

On September 3, 1961, Karl was united in marriage to Darlene Rick at St. Paul’s Lutheran Church in Litchfield. This marriage was blessed with five sons, Daniel, Duane, Daren, David, and Daryl. Karl and Darlene resided in Litchfield. They shared 60 years of marriage.

Karl was employed at Haapala Seed Co. from 1961 to 1964. He then went to work for Ideal Lumber in Litchfield from 1964 to 1978. In 1980, Karl started his own construction business, Lundin Construction, building over 300+ homes in the Litchfield area. In 2008, he started driving truck part-time for Towmaster until 2019. Karl was a long-time member of First Lutheran Church in Litchfield. He was also a member of the Litchfield Lions Club. Karl was elected in April 2003 to the Meeker Co-op Power Board, elected as an officer in 2005, became the STAR Energy Services Governor in April 2008, elected as Chair of the Meeker Co-op Power Board in 2011 serving two 1-year teams, elected again as an officer in 2018, and was currently serving as Vice-Chair.

Karl enjoyed working on old John Deere tractors and machinery, traveling around the United States, deer hunting, and fishing. He especially enjoyed spending time with his family, grandchildren and friends.

Karl is preceded in death by his Parents, Albin and Myrtle Lundin; Brother in infancy; Brother, John Lundin; Several Brothers-in-law and Sisters-in-law.