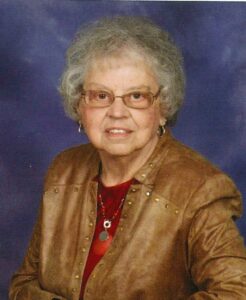 Funeral Service will be held on Friday, January 7, 2022, at 11:00 A.M. at Peace Lutheran Church in Hutchinson, with interment in the church cemetery.

Leona Verna Peterson was born on August 28, 1935, in Camden Township, Carver County, Minnesota. She was the daughter of Oscar and Helena (Baumann) Groenke. Leona was baptized and later confirmed in her faith as a youth at St. Mark Lutheran Church in New Germany, Minnesota. She received her education in Country School and graduated from Central High School in Norwood Young America, Minnesota, with the class of 1953.

On November 26, 1960, Leona was united in marriage to Lowell Peterson, of Cokato, Minnesota, at St. Mark Lutheran Church in New Germany. This marriage was blessed with one daughter, Darcy. Leona and Lowell resided in Hutchinson, Minnesota. They enjoyed many family trips in their younger years. Leona and Lowell shared 44 years of marriage before the passing of Lowell on June 15, 2005.

Leona was employed with various businesses in her lifetime, including Honeywell, Fashion Bug, and Crow River Press. She was a homemaker, and the best Grandma and Great-grandma anyone could ask for.

Leona kept busy with a variety of volunteer work: Bethesda Thrift Store, diaper drives, selling Poppies, mission sewing, church funerals, and donating many gallons of blood in her lifetime. She was a lifetime member of the Hutchinson VFW Auxiliary Post 906, past President of MOCA #65 from 1998 to 1999, and a member of the Hutchinson American Legion Auxiliary Unit 96.

After a courageous battle with Alzheimer’s, Leona passed away on Friday, December 31, 2021, at Harmony River Living Center in Hutchinson, at the age of 86 years.

Leona is survived by her
Sister, Arlys Pawelk of Norwood Young America, MN;
Brother, Linus Groenke and his wife, Joan of Glencoe, MN;
Granddaughters, Courtney Clayton of Northfield, MN,
Danielle Clayton of Hutchinson, MN;
Great-grandchildren, Daylen and Keira of Hutchinson, MN;
Many other relatives and friends.