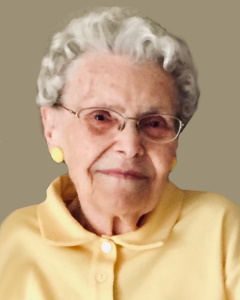 Luella Lorraine Mackdanz was born on March 27, 1927, in Brownton, Minnesota. She was the daughter of Herman and Elsa (Ostermann) Hardel. Luella was baptized as an infant on April 6, 1927, by Pastor Henry Weerts, and later confirmed in her faith as a youth on June 8, 1941, at Immanuel Lutheran Church in Brownton, Minnesota, by Pastor Gerhard Schmidt. She received her education at Immanuel Lutheran School and Brownton High School and was a graduate with the Brownton High School class of 1945.

On September 26, 1946, Luella was united in marriage to Donald Mackdanz at Immanuel Lutheran Church in Brownton by Pastor Gerhard Schmidt. They shared 68 years of marriage prior to the passing of Donald on February 9, 2015.

Luella passed away on Thursday, October 7, 2021, at Cedar Crest Estate in Silver Lake, Minnesota, at the age of 94 years.

Luella is survived by her:
Nephews, R. Alfred Mackdanz of Creston, Iowa,
Charles Mackdanz of Meridian, ID,
Darrell Bach and his wife, Susan, of Montgomery, TX,
George Vassos III and his wife, Valerie of Westfield, MA,
Douglas Vassos and his wife, Hope, of Wellesley, MA;
Niece, Joanne Parker and her husband, James, of Wenatchee, WA;
Many other relatives and friends.

Luella is preceded in death by her Parents, Herman and Elsa Hardel; Husband, Donald Mackdanz.