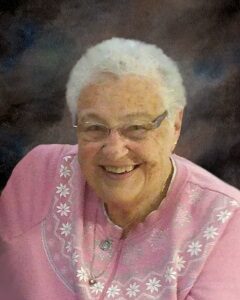 Marian L. Magee, age 89, of Aitkin, Minnesota, formerly of Hutchinson and Ortonville, Minnesota, passed away on Sunday, May 3, 2020, at her home in Aitkin.

Mass of Christian Burial will be held on Friday, September 17, 2021, at 1:00 P.M at St. Anastasia Catholic Church in Hutchinson, Minnesota with interment in the church cemetery.

Recital of the Rosary will begin at 11:30 A.M. followed by Gathering of Family and Friends until the time of the Mass.

Marian Louise Magee was born on March 6, 1931, in Wadena, Minnesota. She was the oldest daughter of Clifford and Eva (Myott) Halbmaier. Marian was baptized as an infant, and was later confirmed in her faith as a youth. She received her education in Wadena and was a graduate of the Wadena High School Class of 1949. Marian continued her education at St. Gabriel’s School of Nursing in Little Falls, Minnesota.

In August of 1950, Marian met John “Tom” Magee in Little Falls, Minnesota. On September 6, 1951, Marian was united in marriage to Tom at St. Ann’s Catholic Church in Wadena. They were blessed with six children, Thomas, Mary, Theresa, Kathleen, Michael, and Michelle. Marian and Tom made their home in Ortonville, Minnesota, until 2001, when they moved to Hutchison, Minnesota. In 2017, Marian and Tom moved to rural Aitkin, Minnesota, on Clear Lake. They shared 67 years of marriage until Tom passed away on December 14, 2018.

Marian enjoyed traveling, fishing, and gardening. She also enjoyed reading, crossword puzzles and watching the Minnesota Vikings football team. She especially cherished the time she spent with her family, grandchildren, and friends.