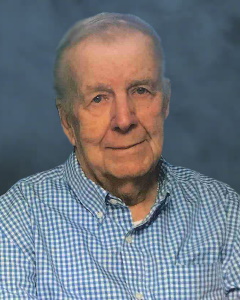 Mass of Christian Burial will be held Monday, June 27, 2022, 10:00 A.M. at the Church of St. Pius X in Glencoe, with interment in the Glencoe Catholic Cemetery.

Visitation will be held Sunday, June 26, 2022, from 4:00 – 7:00 P.M. at the Johnson-McBride Funeral Chapel in Glencoe and will continue one hour prior to the service at the church on Monday.

Marvin Hilbert Heinrichs was born on June 15, 1927, in Carroll, IA. He was the son of Herman and Eleanora (Koenig) Heinrichs. Marvin was baptized and confirmed at St. Augustine Church in Halbur, IA. He graduated with the Arcadia high school class of 1945. Marvin entered the United States Navy toward the close of World War II and was stationed in California aboard the USS Agawa in 1945 and 1946.

Marvin loved sports and excelled in baseball as a catcher. He frequently commented that “baseball has been good to me,” especially since he met his future bride, Maxine, at a baseball game. Marvin was a semi-professional baseball player for the Wilmont Eagles and Pipestone Indians in MN and Carroll Merchants in Carroll, IA. He later continued as an amateur baseball player and manager for the Fulda (MN) Giants. For many years he enjoyed refereeing high school and college basketball games.

On June 22, 1948, Marvin was united in marriage to Maxine Ida Koster at St. Bernard Catholic Church in Breda, IA. Marvin and Maxine shared 3 days shy of 74 years of married life together. They were blessed with 7 children --- Gayle, Carol, Duane, Linda, Ellen, Keith, and Deann.

After his baseball season in 1957, Marvin and Maxine purchased a floor covering business in Fulda, MN. From here they started Heinrichs Floor and Wall Covering, which they operated successfully for 36 years until they sold it in 1992. Marvin was elected and served as a Fulda councilman for 9 years and then as mayor for 6 years. He served on numerous committees at St. Gabriel’s Catholic Church and was a life member of the American Legion in Fulda. He was a Knights of Columbus member at St. Leo’s Catholic Church in Pipestone, MN, and a charter member of the American Legion in Arcadia, IA. Marvin had a strong sense of civic responsibility and served in many public organizations. Marvin and Maxine moved to Glencoe, MN, in October 2015, where they became members of the Church of St. Pius X in Glencoe.

After retirement, Marvin and Maxine enjoyed coffee and outings with their Fulda friends and their annual trips to visit each of their children who lived in 7 different states.  Marvin enjoyed woodworking, painting, and golfing, and he was an avid fan of watching his children and grandchildren participate in sporting and academic activities. Marvin loved life and his glass was always ¾’s full. He will be remembered for his quick wit and sense of humor.