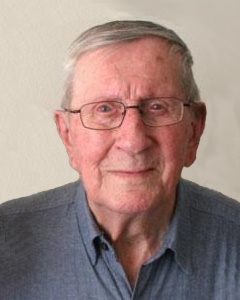 Private Family Graveside Service will be held at a later date.

Memorials preferred to the family of Milton Klammer.

Milton Henry Klammer was born on January 15, 1919, at home in Preston Lake Township, rural Renville County. He was the son of Henry and Phoebe (Walters) Klammer. Milton was baptized as an infant at his home on February 2, 1919, and was later confirmed in his faith as a youth on May 14, 1933 at Buffalo Lake Zion Lutheran Church in Buffalo Lake. He received his education in Buffalo Lake, and was a graduate of the Buffalo Lake High School Class of 1936.

On January 2, 1965, Milton was united in marriage to Bernadine Anderson at Long Lake Lutheran Church. Milton and Bernadine made their home in Preston Lake Township, rural Renville County, where they farmed from 1965 until 2010. They shared 54 years of marriage before Bernadine passed away on March 31, 2019.

Milton took over the family farm in 1941 after his father passed away. He retired in 2010. Milton was a lifetime member of Zion Evangelical Lutheran Church in Buffalo Lake where he served on the church council and also sang in the choir,

Milton enjoyed music and playing his trombone in area concerts, polka bands, and orchestras for many years. He especially enjoyed spending time with his family and friends.

Milton is survived by his:
Sister, Mae Wick of Hutchinson, MN;
Nephew, Thomas Wick and his wife, Wendy of Hutchinson, MN;
Nieces, Kristine Cipra of Brandon, MN,
Mary Jane Skurat and her husband, Jon of Villard, MN;
Many great nieces, nephews, other relatives, and friends.