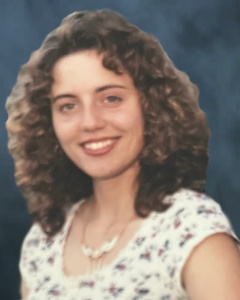 Nicole Ann Wendinger, age 43, of Arlington, passed away on Wednesday, May 4, 2022, at her home in Arlington, Minnesota.

Funeral Service will be held Tuesday, May 10, 2022, 11:00 A.M. at First Evangelical Lutheran Church in Glencoe, Minnesota.

Visitation will be held Monday, May 9, 2022, from 4:00 – 8:00 P.M. at the Johnson-McBride Funeral Chapel in Glencoe, Minnesota, and will continue one hour prior to the service at the church.

The service will be live-streamed on Tuesday, May 10, 2022, 11:00 A.M. on First Evangelical Lutheran Church’s Facebook page. You can also access the live-streamed service via the church’s website at www.firstglencoe.org and click watch worship services online.

Nicole Ann Wendolek was born on September 23, 1978, in Ames, Iowa.  She was the daughter of Larry and Bobbi Kay (Stumbo) Wendolek.  Nicole was baptized as an infant on October 15, 1978 and was later confirmed in her Catholic faith in the year 1995.  On March 11, 2001, Nicole joined First Evangelical Lutheran Church and found comfort in the Lutheran faith.  She received her education at Silver Lake Catholic School 1st-6th grade and graduated with the Glencoe-Silver Lake High School class of 1997 with honors.

While in high school, she was involved in Tennis, FFA, and Honor Society. She also represented her hometown of Silver Lake with great pride and grace as the 1995-1996 Pola-Czesky Queen. She also went on to represent McLeod County as a Dairy Princess. She went on to attend her first year of college at the University of Minnesota in Winona for one year before transferring to the University of Minnesota in St. Paul and also became a member of the Sorority – Beta of Clovia.

After receiving her degree, Nicole went on to work in the medical field as a Histotechnician. She enjoyed this work and especially her work family at Park Nicollet. In March of 2001, Nicole began her greatest role, as a mother to her son, Dusty. In 2008, she became a mother to her daughter, Beth. She cherished and loved her children beyond words, always putting their needs and wants before her own.

On May 11, 2002, Nicole was united in marriage to Chad Theodore Wendinger by Rev. Harvey Kath at First Evangelical Lutheran Church in Glencoe, Minnesota.  Nicole and Chad made their home on the farm in Arlington, Minnesota.

Nicole loved to get dolled up, wearing dresses and jewelry, making her feel beautiful.  She loved caring for the animals and family pets on their farm. She loved flowers and enjoyed coloring “Precious Moments” pictures to share with her loved ones. Nicole truly cherished the time she spent with her children, family and friends.

Nicole passed away on Wednesday, May 4, 2022, at her home in Arlington, Minnesota, at the age of 43 years old. Blessed be her memory.

She is clothed in strength and dignity and laughs without fear of the future.  Proverbs 31:25