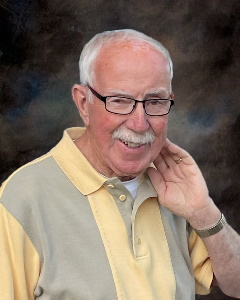 Mass of Christian Burial will be held on Tuesday, November 29, 2022, at 11:00 A.M. at St. Anastasia Catholic Church in Hutchinson, with interment in the church cemetery.

Gathering of Family and Friends will be held one hour prior to the Mass at St. Anastasia Catholic Church.

Robert James Cady was born on March 7, 1938, in Madelia, Minnesota. He was the son of Ray and Lucille (Johnson) Cady. Robert was baptized as an infant and was later confirmed in his faith as a youth at Trinity Lutheran Church in Madelia. He joined the Catholic Faith through the Rite of Initiation at St. Anastasia Catholic Church in Hutchinson, Minnesota. He received his education in Madelia, and was a graduate of the Madelia High School Class of 1956. He furthered his education at Mankato Vocational Technical College in Mankato, Minnesota.

Robert entered active military service in the United States Army on April 1, 1957, in Minneapolis, Minnesota. He reenlisted on September 25, 1959, in Hanau, Germany, and served his country during Peacetime. He received an Honorable Discharge on September 24, 1962, at Fort Riley, Kansas, having achieved the rank of Army Specialist 5.

On January 30, 1960, Robert was united in marriage to Roswitha Jakob at St. Peter’s and Paul’s Catholic Church in Aschaffenburg, Germany. This marriage was blessed with two children, Floyd and Pamela. Robert and Roswitha resided in Fort Riley, Kansas, and Hector, Minnesota for a short time, and later moved to Hutchinson, Minnesota. They shared 62 years of marriage.

Robert was employed as a Supervisor at 3M in Hutchinson. He retired on August 1, 1995. After Robert’s retirement, he worked part-time at ACE Hardware in Hutchison for 25 years. He was a member of St. Anastasia Catholic Church, where he was an usher and on the Cemetery Committee. Robert was also a member of the Hutchinson American Legion Post #96.

Robert enjoyed fishing, hunting, golfing, woodworking, bicycling, and traveling. He earned his private pilot license and he enjoyed flying whenever he got the chance. Robert’s final wish to fly one last time happened at the age of 84 years old. And now he’s flying high in the sky. He especially enjoyed spending time with his family, grandchildren and friends.