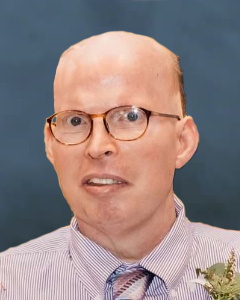 Funeral Service will be held Wednesday, May 4th, 2022, at 11:00 A.M. at First Congregational United Church of Christ in Glencoe with interment in the Glencoe City Cemetery.

The service will be live-streamed on the First Congregational United Church of Christ’s Facebook page.

Todd Curtis Hoese was born on October 12, 1961, in Glencoe, Minnesota.  He was the son of Clayton and Janet (Herrmann) Hoese. He was baptized as an infant and later confirmed in his faith as a youth. Todd received his education in Glencoe and was a graduate with the Glencoe High School Class of 1981.

Todd entered active military service in the United States Navy on July 27, 1981. He received an Honorable Discharge on May 19, 1983. He was very proud to have served his country.

Todd had a very strong faith and attended the chapel services at Good Samaritan Society. He attended many activities at Good Samaritan Society and the other residents were like family to him. Todd loved to joke around and make people laugh. He enjoyed baking cookies, sharing them with friends and family and bringing them to the banks and their employees. Todd also enjoyed going to casinos and playing blackjack, traveling to Florida and Las Vegas, fishing, eating canadian bacon and pineapple pizza, and spending time with his nieces and nephews. He overcame many challenges throughout his life, but he would always make the best out of any situation.

Todd is preceded in death by his Parents, Clayton and Janet Hoese; Brother, Terry Hoese.