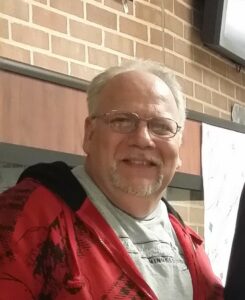 Todd Lee Pinske was born on May 27, 1961, in Minneapolis, Minnesota. He was the son of Willard and Leota (Willhite) Pinske. He was baptized as an infant and later confirmed in his faith as a youth. Todd received his education in Norwood Young America, Minnesota, and graduated from Central High School with the class of 1979.

On September 26, 1981, Todd was united in marriage to Jennifer Galbrecht in Wayzata, Minnesota. They made their home in Plato, Minnesota. Their marriage was blessed with three children, Marshal, Leah and Austin. Todd and Jenny shared almost 40 years of marriage.

Todd worked as an office logistics technician at General Mills for 20 years.

Todd enjoyed riding his motorcycle, grilling, working on home improvements and car repairs. He also enjoyed cooking specialty dishes in the kitchen and especially making a huge feast for Thanksgiving and Easter. Todd cherished the time spent with his family and friends.

Todd passed away on Thursday, September 16, 2021, at his home in Plato, at the age of 60 after being diagnosed with a Glioblastoma Brain Tumor.

Todd was preceded in death by his Parents, Willard and Leota Pinske; Granny, Bertha Willhite.