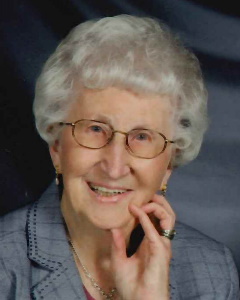 Public Interment for family and friends will be held on Friday, September 10, 2021, at 2:30 P.M. at Rosehill Cemetery in Wells, Minnesota.

Velma Fern Brandt was born on January 4, 1922, in rural Byron Township, Waseca County, Minnesota. She was the daughter of Thomas and Hulda (Knack) Callahan. Velma received her education in Freeborn and was a graduate with the Freeborn High School class of 1939.

On January 15, 1942, Velma was united in marriage to Harold A. Brandt at First Evangelical Lutheran Church in Wells, Minnesota, (now Good Shepard Lutheran) where she was a lifelong member. The couple began married life in the Walnut Lake area, and then relocating to rural Minnesota Lake where they raised four children, Eugene, Nadine, Harlan, and Gloria. Retirement brought them to Wells in 1998 where Velma lived until relocating to Hutchinson Ecumen Oaks Assisted Living in November 2016, where she resided until her death.

Velma’s life centered around her family, friends and her faith. For 25 years, Velma was employed at the Parkview Home in Wells. Despite leaving Wells, Velma continued to speak fondly and frequently of her co-worker family at Parkview. Velma always enjoyed a good game of cards and the friendships they brought with them. Her sense of humor will be missed by all that knew her.

Velma passed away on Monday, September 6, 2021, at Ecumen Oaks in Hutchinson, Minnesota, at the age of 99 years.